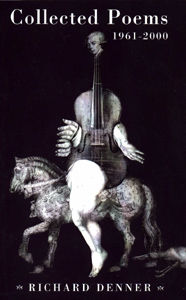 THE COLLECTED
POEMS of
RICHARD
DENNER


D Press: A Jewel in the Net

Like Indra's all-encompassing jewel net, D Press sparkles and shines with an offering of well-crafted chapbooks that reflect more than forty years of publisher Richard Denner's handiwork with words, ink, paper and illustration. Available works are always new as the idea of keeping press runs short allows for a quick turnover, a low cost or break even per book, more time for fresh material and other writers to make it into print. Present titles include Angio Gram by Charles Potts, Celestial Cattlecall by Lee Harris, Rebel Girls by Leila Castle, What Is The Sign? by Gay Shelton and A Year in Cows by Jane Booth. Belle Randall (Wax Museum) and Luis Garcia (Even Steven) have been performing with Richard for years under the group name Circle of Friends and are kindred spirits.

Although conceived in a Ketchikan attic flat in l967, the roots of D Press go back to the Bay Area of 1959. Richard took classes at UC Berkeley (Diane Wakoski was there) and perhaps unconsciously received the metaphysical mantle of alumnus poet Robert Duncan. Soon, Richard found himself reporting for Public Service Station KPFA, getting married and working as a bindery clerk. He became acquainted with every facet of printing: the feel and look of paper, the color and smell of ink, typesetting and the uses of different typeface, the feeding and rolling of presses, the cutting and stitching of recto and verso. After a move to Aptos for more classes at Cabrillo College, Richard became a regular at The Sticky Wicket, a coffee house with poetry readings and live jazz. Many ordeals and a few years later, he attended the seminal 1965 Berkeley Poetry Conference, what John Bennett has called, "an event creating white light intensity that rivaled any drug high and had more staying power."

This convergence of the Black Mountain, Berkeley Renaissance, Beat and Northwest Schools gave Richard the pivotal opportunity to study under such avant-garde poets as Charles Olson, Ed Dorn, Robert Creeley, Allen Ginsberg and Jack Spicer. Later he would study with Robert Bly, Gary Snyder, Phillip Whalen, Denise Levertov and Carolyn Kiser at Fort Worden Center for the Arts in Port Townsend, Washington. But it was Jack Spicer's molding of series poetry into little books that had the most singular effect.

In 1965 Richard became a staffer on one of the original underground newspapers, the Berkeley Barb and wrote his first article, Where Is The Citizen?, which according to publisher Len Fulton (Dust Books) put the coffin nails in this floundering Berkeley co-op paper which he co-directed. Besides printing his poems in The Barb, Richard became a street poet who gave impromptu solo and regular group readings with others such as Luis Garcia, Richard Brautigan, Richard Kretch, John Oliver Simon, and Gene Fowler. "I would hold five different colored magic markers," Richard said, "and write rainbow words on girls' legs and arms." Poems from these embryonic years appear in his Letter to Sito in Time of War (D Press 1998).

Here I am reminded of Cummings or Snyder, words in vertical order as if they had fallen off a pen, images juxtaposed with ideas to steer and grip the eye rather than rhyme scheme, line length and academic filler. we find/ourselves/in a new/world/speaking/an old/language//we speak//of beauty/and feelings/while the/machines/blast/the birds/ from our/hearts//watch/the words/ hear/the howl/come/to the ear/eye/nose/lip//scream/at the/dichotomy/of the/comma—/a dream/an illusion/how time/passes//dinosaurs/dance off/the map/where you/and I sit/drinking/coffee//we hold/down/this loose/end/of the/universe/feeling/at home/in the/smoke. Great one breath rhythm here, vowels echo and consonants resonate while war and apathy are clearly addressed. An economy of words, words used like paint or graffiti, well-woven words that challenge and explode with intensity and insight, simple poems not only of use but of beauty and all connected by a central motif—these would become Denner trademarks. Luis Garcia aptly alludes to them as "dinner" in the title of his book, Poems for Dinner (Summit Road Press 1997).

According to Karl Shapiro, a rational person is least able to understand poetry, and the poet must find inspiration and pry truth from hard won experiences. At The Barb, Richard was suffering from rationalitus with acute ennui and hot flashes of Armageddon. So he took off for Alaska, in search of lost horizons, to find his true self (and what is reality?) through a series of pristine cognitions. He worked as a water-chaser, unsetting choke and bundling logs for a logging outfit. For two years Richard lived with wife and child in a cabin at Deep Bay off berries, hunting and fishing. Back in civilization, he got a job on the Ketchikan Daily News and worked at a cold storage plant. Tackshack (D Press 1998) is full of such experiences: the Tongass National Forest, glacier deposits, bears, dead salmon, king crab, soil samples, and The Beast (Richard's Alaskan Pipeline poem which pits industrial horrors against natural habitat and spells indigenous doom).

The first D Press chapbooks were simple affairs, printed from a Kelsey movable type handpress and 60 point Boldini Bold, all acquired for fifty bucks. The pages were hand cut, hung to dry in Richard's attic flat and hand bound, yet showed brilliant illustrations (Aztec Design by Grant Risdon). Good paper, fine cover art with linoleum block prints to accentuate the poems, a balance of art and word, these Dennerisms would become D Press trademarks. An old picture of Richard adorns one cover: he appears much like young Trotsky in Siberia with wire-rimmed glasses, mustache, student garb and a pensive gaze...he had reason for concern.

Up the Alkan Highway, Richard traveled to the University of Alaska at Fairbanks. He worked in the backshop of the student newspaper and graduated in 1972 with degrees in English and Philosophy. D Press was admitted to the campus library but banned from the UA student bookstore. Perhaps it was the explicit prints in Linoleum Nudes or graphic poems, such as 'Musky/Hump/in US/for 69.' Whatever, feathers flew, and the UA Polar Star (which later printed Richard's works) put out the story, 'Books Raise Censorship Question.' Professors came to his defense; Richard's chapbooks were found to have literary and artistic merit; and D Press was back on the shelf. It would be easy to dismiss this book ban as provincial fuss, however the ground D Press broke in Fairbanks mirrors the breakthroughs of alternative publishers such as Grove Press and City Lights in the lower 48 states.

Next stop Seattle, where Richard took a job with the Queen Anne News and studied at Port Townsend. Islam Bomb (D Press 1998) presents some of Richard's first post-modernist poem experiments during these years (1972-74). Here there is an expansion of line and poem length as well as consciousness expanding East meets West terminology. Much like Eliot, Richard combines his fragments into a unified whole, and does not leave one in a forest of foreign text (like Pound) or babble (like Joyce). Using even romanized Sanskrit and Tibetan is high risk business, yet Richard explains his diction and uses it as part of a tapestry whose weave is encyclopedic in scope. In point, his four page poem on the once unprintable F word reminds me much of Robert Grave's exhaustive piece Lars Porsena, or The Future of Swearing.

From Seattle, Richard went to Ellensberg to oversee a 300 head cattle ranch in Badger Pocket for several years. Between stints in Alaska, he worked at Moe's Bookstore in Berkeley, so perhaps it was déjŕ vu that he opened the Fourwinds bookstore in Ellensberg (1977). This literary nucleus was enlarged to include a restaurant by Richard's son, Theo, who continues to operate it today. It was here that Richard received a Washington State Arts grant to produce Ellensberg Anthology which featured and promoted local writers. The list of Denner influences East of the Mountains seems endless: more anthologies, readings and poetry workshops at his bookstore, formation of a city arts & crafts festival, exhibition of his books and printing techniques at Kittitas County Art Gallery, a three-day poetry workshop for the Washington Poets Association, and video production for Ellensburg Public Television.

D Press books began to resonate with new organic imagery in his Cow Songs and New Gravity. In 'Diamond Hanging I Blues' the lines are simple and effective, I mend the fences./I tend the herd./...The shit is ten feet deep/and I can't eat or sleep/coyotes yap all night/below the blown moon. A number of D Press books can be considered pivotal in the evolution of Richard's poetic style, psychic metamorphosis and creative adaptability. The Scorpion (1975) combines all of Richard's loves: astrology and tarot, philosophy, Tantra, Latin ('Cogito Ergo Shazam') and the fine art of printing, which Richard learned thumping type for Wesley Tanner at Arif Press.

Xitro pays tribute to Richard's spiritual quest, his teachers, Ginsberg and Tsultrim Allione, a vast range of philosophical studies and Tibetan Buddhist practice. When I read On Borgo Pass (1998), the line drawings mixed with poetry take me back to the novel water colors of Henry Miller and the wild pictopoems of Kenneth Patchen, apocalypse now/a pair of lips now, or words of my perfect T-shirt/Don't Worry/Be Hopi.

For fifteen years Richard annually planted trees, giving back to the earth and getting in touch. Now, he plants seeds by teaching at a school run on the Steiner Method and also online in poetry chat rooms. When I was asked to write this essay on D Press and 40 years of Richard Denner, I was told there were about 100 chapbooks, and I thought, pull the other leg. James Tate is called prolific because he published some twelve books of poetry in six years. Richard is more likely to publish six books in one year along with a bevy of other poets. James Laughlin (New Directions) published William Carlos Williams and Ezra Pound for years at his own expense when they were not selling. He did not want them to end up like Blake, being generally unread in their own lifetime. In the same sense, D Press allows greater access to a variety of poets whose vitality is assured by limited editions of selected work.

As I opened a 20 pound box mailed from Santa Rosa, chapbooks flooded my table, and I wondered how I could begin to encompass such a literary sea (and most of Richard's work is out of print). Seamus Heany's old headmaster used to look over his writing and sigh, "Ah, pure Hopkins" or "Ah, pure Chekov." My eyes swim through this tidal wave of excellence, collage covers which steal my breath, Leonardo illustrations, such brillig poems, and I can only whisper in awe, "Ah, pure Denner."